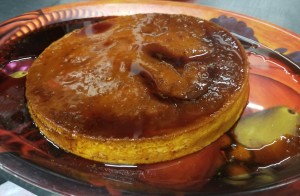 Quesillo is one of the most popular desserts that you can find in Venezuelan homes, especially during birthday parties when the birthday cake is served with jello and quesillo as a side of the birthday cake.

As a Venezuelan the name flan is not very common, for that reason the curiosity about how to differentiate both desserts the best way possible came to my mind after lots of customers of our food truck ask: Is the quesillo like a flan or it is a flan? I always answer no to that question, because quesillo is not a flan, but I know that this information could be difficult to understand especially if one is not from Venezuela. Even though for me as a Venezuelan it has been difficult to explain, for that reason I decided to investigate about it in order to make it clear for our customers, so let’s talk about it.

Flan is a dessert known by most people around the world and it came to our Latin American culture thanks to the influence of the Spanish. In Europe flan is well known and it can be sweet or not sweet. There are other types of dessert very like the flan like crema catalana, crème brulée, fried milk and so on.

Venezuelans created the quesillo which is a version of a flan but they have important differences such as:

Both of them use milk and caramel for preparation.Venezuelans call it quesillo because when it’s ready it has small holes, produced by the use of yolk and egg white that makes it look like cheese, but this dessert doesn’t have cheese at all. Interesting, right? 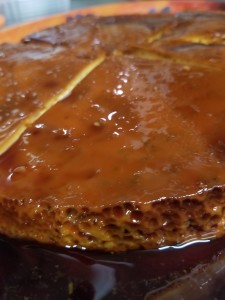 Also we have different ways of making it, like adding flavors such as chocolate, coffee, lime, passion fruit, coconut, liquor and so on.

Those are the main differences between a quesillo and a flan. We LOVE our quesillo and I know that you love it too.

I hope this information had been useful, and next time you go to any of our food trucks remember that you are eating an authentic dessert that you can also have at home during:

Birthdays
Thanksgiving: Why not impress your family members and friends with this special treat? They’ll love it.
Christmas.
Meetings or get togethers.

You just have to contact any of our locations with 24 hours in advance minimum, and place an order.

The best of all is that you already have the knowledge to answer the question that your guests will make: Is this like a flan or is this a flan?