The Hallaca is the main dish of Venezuelans during Christmas. 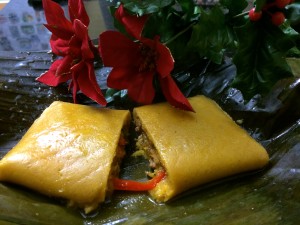 This special dish brings us all together. Hallaca has a long preparation process, so it needs to be prepared by a group of people. In Venezuela the entire family or a group of friends get together, put on some Gaita music, which is a type of music that Venezuelans listen to during Christmas, and start preparing this spectacular mix of flavors and colors.Every single family has their “secret” way of preparing this dish, and every single person will say: “There is no other Hallaca like the one that my mom, grandmother, (and so on) prepares” The Hallaca is a point of family pride, something that identifies every single Venezuelan, like a family coat of arms.

But, what is an Hallaca and where did it come from? 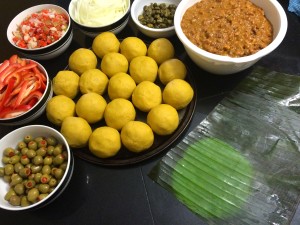 Hallaca is a cake made with corn dough, seasoned with chicken soup, dyed with annatto (an orangish-red condiment and food coloring, derived from the seeds of the achiote, which Venezuelans call onoto). Vegetarian Hallacas dough is not seasoned with chicken soup and is prepared with water and salt.The Hallaca is filled with a delicious stew, made in different ways based on which Venezuelan area this dish is prepared. However, at La Arepa we prepare the stew with beef and pork tenderloin and smoked bacon, cut into small pieces and then mixed and marinated with bell pepper, onion, garlic, salt, pepper, red wine and inspiration. The stew
is marinated and then slow cooked for some hours in order to have the amazing flavor that it gets. 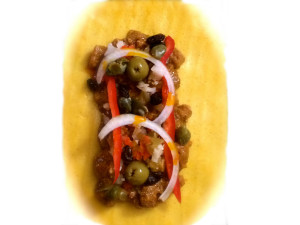 tew is ready, we spread the dough on top of the banana leaf (or bijao, depending on  availability) and fill it with olives, capers, raisins, onion, red  pepper, and a variety of pickled. The Hallaca is wrapped in a rectangular shape with cotton string and boiled. 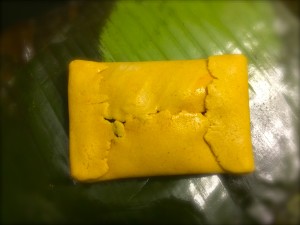 But let’s learn how it is prepared in some areas of Venezuela: 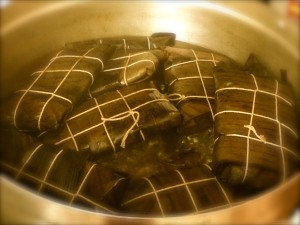 Some people on the east side of Venezuela add fish to the stew instead of meat. Others put a whole chicken in the stew. Some people in the Andes leave the meat raw but well marinated to be cooked in the cake for an extra hour. For the filling, some people add sweet pepper, almonds, chickpeas, black beans, potato, or even a hardboiled egg.

Again, it depends on the area where the hallaca is prepared and the family traditions, but the most important fact here is that this amazing cake represents a gesture of friendship, gentleness and cordiality among people, because the hallaca is shared with others outside the family as a way of showing kindness and pride. As I said, everybody believes their hallacas are the best, so everybody should try it. In fact, my family’s hallacas were very popular back home and now in Portland (just saying).

How is the Hallaca served?

It is served every Christmas Eve and New Year’s Eve nights with chicken salad, ham rolls and ham leg, accompanied with wine, or cream punch. After finishing the main dish, desserts like sweet papaya and panettone, among others, are served.

You may think that’s a lot of food, but Venezuelans love partying, and this feast lets us stay up all night dancing and having fun.

Most people by now are probably wondering about the origin of the name, or about the history of the word hallaca.

There are different versions about the origin of the word Hallaca. Some say this word comes from the word ayacá, of the indigenous group Tupí-Guaraní, which means lump.
Other says that the word came from the Spanish word there (allá), from the stew prepared with ingredients that came from abroad, and here (acá), from the corn dough and the banana leaf found in our country; the word was combined and refined becoming Hallaca.

The hallaca comes back from the colonization era, around the 15th and 16th century. The slaves and indigenous servants filled their corn dough cake with leftovers that their oppressors didn´t eat.

Also, it is said that the Spaniards tried to improve the Aztec tamal, adding their ingredients to the cake filling.

When the road called “El camino de los españoles”, from the coastal town of La Guaira Port to the Capital Caracas was under construction, the workers were generally natives, and they used to eat buns made of pure corn. Now it’s known that eating only pure corn can lead to avitaminosis, an illness called “pellagra”. The population was asked to donate the rest of their everyday food to those natives so they could fill their buns with leftovers.

The story goes that one Christmas the Caracas bishop asked the population to change their over-the-top way of celebrating, and instead of wasting huge amounts of food and drinks during the season, he asked them to eat like the natives, who were working on the road, by filling their buns with leftovers. The Criollos, who were the descendants of the Spanish but born in the American continent, were fearful of God and accepted the demand of the bishop and started to make their own versions of what we now know as the Hallaca, with each one tastier than the other.

There’s an expression of one of the greatest intellectuals Arturo Uslar Pietri in Venezuela during the 20th Century, who said the following: “Hallaca is an exemplary way of understanding the mix of cultures, because inside that cake there are raisins and olives from the Romans and Greeks, the caper and almond from the Arabs, the beef cattle from the colonizer captains from Castilla, and the corn and the banana leaves from the natives.”

Independently of the origin of this amazing dish, it is clear that the explosion of flavors can be found in every bite, expressing the deepest root of the Venezuelan who made it, because once again the Hallaca is an expression of every Venezuelan´s home, pride, and themselves.

For that reason, La Arepa is proud of bringing to you this dish, which is a part of the multicultural Venezuela and a part of what we are in every bite: A lot of sabor.

We guarantee…. You’ll want more than one. 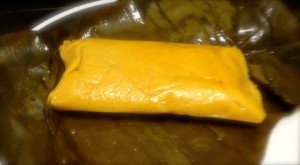